A Busy Summer for MVS Isle of Wight 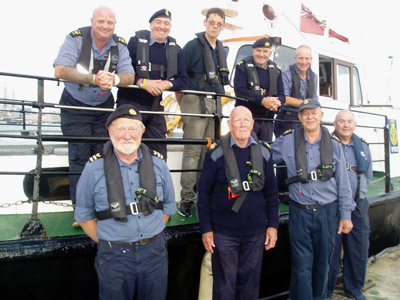 The Isle of Wight unit has had a busy summer season this year.

It began in May with the Riverfest at Newport Harbour where one of the MVS members was dressed as King Canute and raised funds for the unit by people wanting to have photos taken with him.

In June there was the Round the Island Yacht race with 1500 yachts of all sizes and classes racing anti-clockwise around the Isle of Wight from Cowes.
The MVS as usual played a part by providing a marshal boat on the east of the island between Bembridge and Portsmouth.

On the same day the IoW Unit was at an Armed Forces Day event in Ryde, enjoying the barmy summer day and being able to see the racing yachts creeping by.
The IoW members provided communications cover for the organisers of the AFD and acted as stewards for the veteran’s parade and other events during the day.

The next event was Cowes Week when East Sussex 1 was booked to be moored on the NW corner of the new breakwater to help mark the exclusion zone on the breakwater construction site.

During Cowes Week the IoW Unit also crewed on the Cowes Harbour Master’s boats and one of our members, Kerran Talbot, who holds his advanced powerboat qualification, was allowed to drive the jet drive RIB.

The next event was the Oar-some Challenge, organised by a team of volunteers to kayak round the island over a period of eight days.
It was set up to raise awareness of Alzheimer’s disease and dementia with daily receptions at places all around the coast of the Isle of Wight.

The Shore Support team for the whole event was AVO (South) Lynn Peppitt and Volunteer Eric Chestnutt, IoW Unit, who travelled by car and observed from vantage points ashore and advised by radio as required.

East Sussex 1 was to be in the Solent during September, so she had been asked to do the cover round the back of the island in company with a 9.5m jet drive RIB from UK Youth Maritime Training Academy at Lepe on the southern coast of the New Forest.

These two vessels took over the escort duty from Fort Victoria and accompanied the kayaks round to Bembridge.

Picture Top: The crew of ES1
Picture Middle: Lepe 1 catching up with ES1 at the ‘back of the Wight’
Picture Bottom: Engineers ‘pow-wow’ on ES1